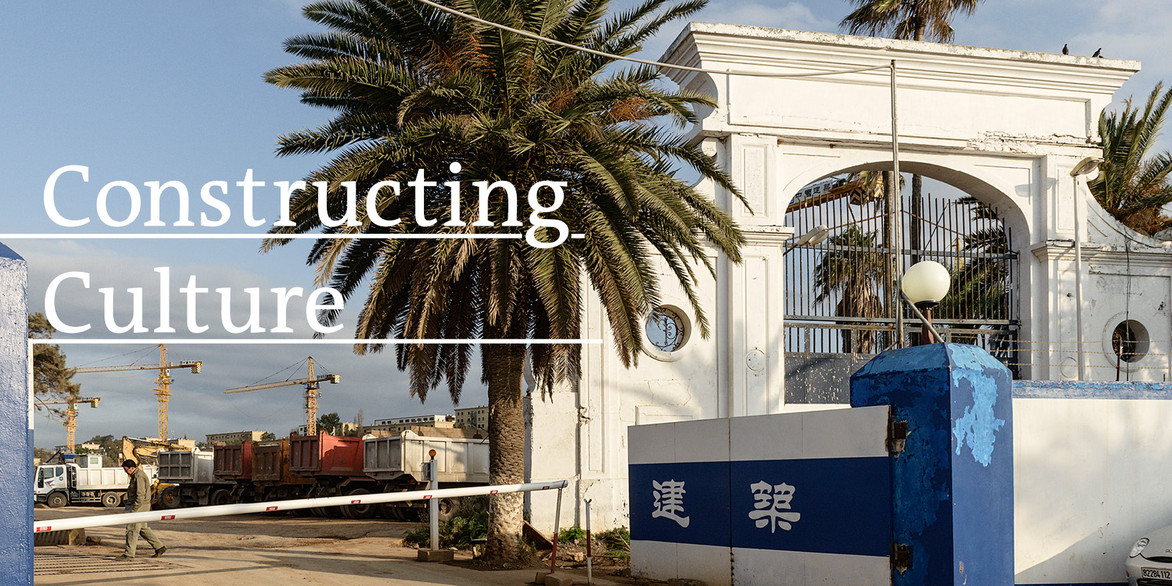 The exhibition ends on Friday 15th of May at 12 am.

The exhibition "Constructing Culture - Architecture connects Cultures" presents two international cultural buildings of KSP Jürgen Engel Architekten, including the Great Mosque in Algiers, whose construction work began in 2012. Like no other project, the Great Mosque in Algiers, which in the future will be the world’s third largest Great Mosque, represents collaboration that transcends countries, culture, and religion. It was designed on behalf of the Algerian state by German architects, and is being built by a Chinese con-struction firm. Other projects include the National Library of China in Bei-ing, the Jiangsu Provincial Art Museum in Nanjing, and the Tianjin Art Museum.

The sequence of rooms in the exhibitions traces the chronology of the work performed outside Germany by KSP Jürgen Engel Architekten. The first (and largest) room showcases the projects in Asia. The National Library of China in Beijing (completion in 2008) marked the company’s international breakthrough. With this in mind, the Beijing office was founded over 10 years ago. In the following years the exhibition buildings in Nanjing (2010) and in Tianjin (2012) were completed. The next two rooms display exhibits about the Great Mosque in Algiers. The building site in Algiers is currently buzzing with activity. Alongside German architects and domestic Algerian workers there are around 1,200 construction workers from the China State Construction Engineering Corporation (CSCEC), a state-run general contractor, working there.

A total of 44 atmospheric, in some cases bizarre photographs illustrate the different settings and building sites, as well as the relevant cultural context in which these structures emerged. Models, samples of materials, and more in-depth information provide an opportunity to address individual aspects in greater depth. Quotations by Jürgen Engel that are printed on the exhibition walls exemplify the approach, the architectural deliberations, and the design concepts, on which the cultural edifices are based.

The Exhibition Concept and Design

The exhibition in Architekturgalerie in Munich is divided across three rooms. In the first room (Room 1) the three cultural edifices built in China are on display. In each case, a large image (150 x 150 cm) presents the completed structure. Numerous photographs, including shots of the building site, reveal the structures’ construction process, and demonstrate how the buildings were constructed using in some cases simple technical means. Other images show the construction workers, the people on site. They are spur-of-the-moment snapshots, quaint scenes, unusual situations. They show the people and their origin, rituals, and culture. Other images illustrate the building site and its surroundings. They are intended to elucidate the structural and cultural context, in which these structures are being built.

In front of the window facing the exhibition wall, there is a large interior image for each of the three Asian projects. Each image is printed on floor-to-ceiling banners, each of which is divided into three. They are pushed slightly towards each other, such that the images are distorted. They show the view from the inside of the building outwards, and correspond with the large (outside) views of the buildings.

The two other exhibition rooms (Rooms 2 + 3) are devoted to the Great Mosque in Algiers. Like in the first exhibition room, photographs depict the construction process on the around 27-hectare construction site in the Bay of Algiers. Original-size samples of materials complement the photographs. The third room, which has no windows, represents the Mosque’s Prayer Room. Fitted with a graphically abstracted “prayer rug”, it features a film projection showing, among other things, a visualization of the Prayer Room as well as a TV report filmed by the regional public TV channel Hessischer Rundfunk about the architect Jürgen Engel, who takes viewers on a tour of the building site for the Great Mosque in Algiers. A large illustration (150 x 150 cm) of this major project in the Bay of Algiers complements the film projection. 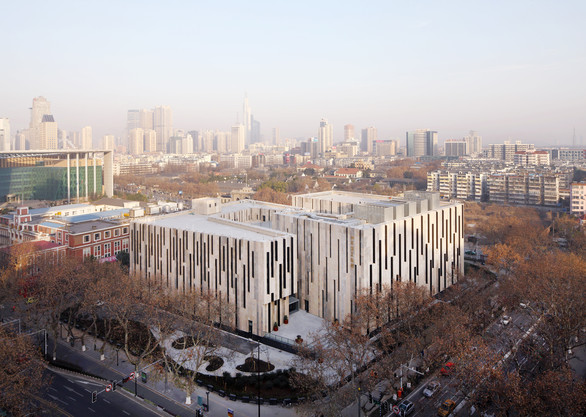 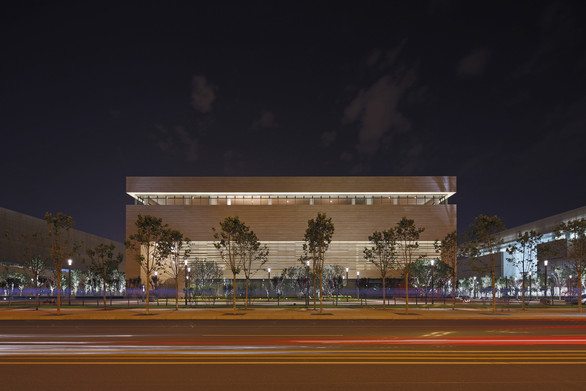 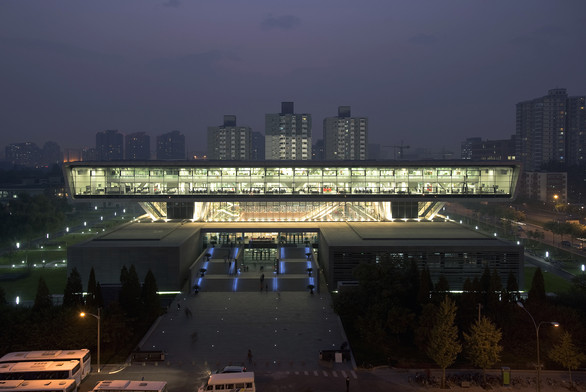 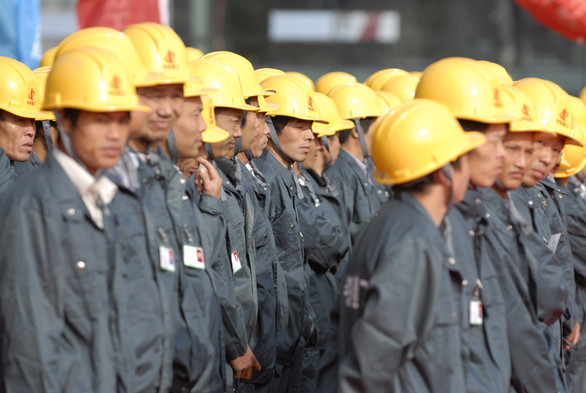 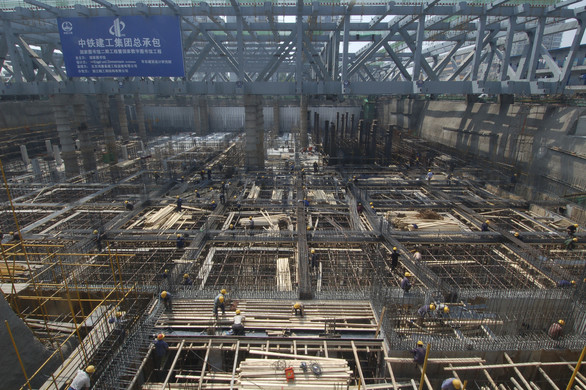 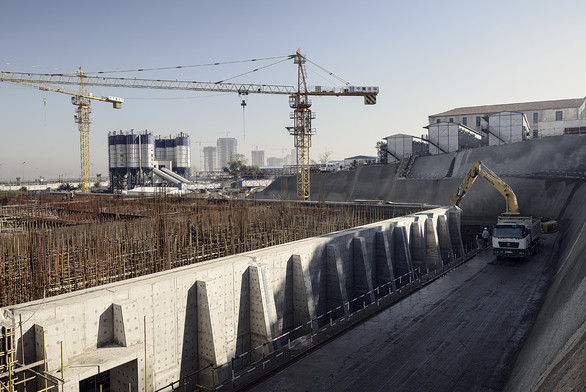 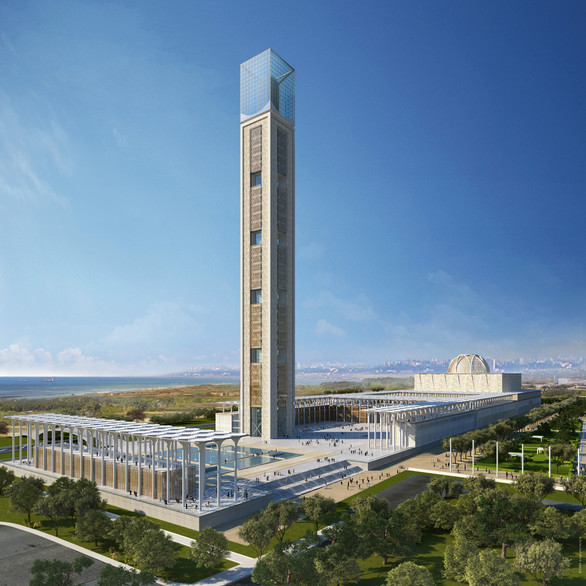 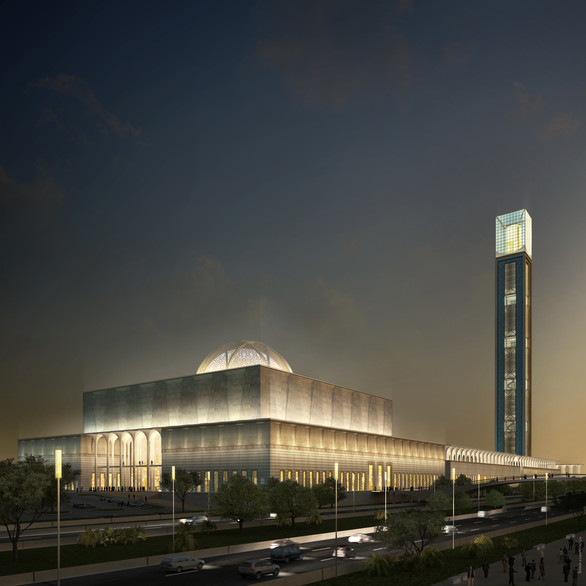 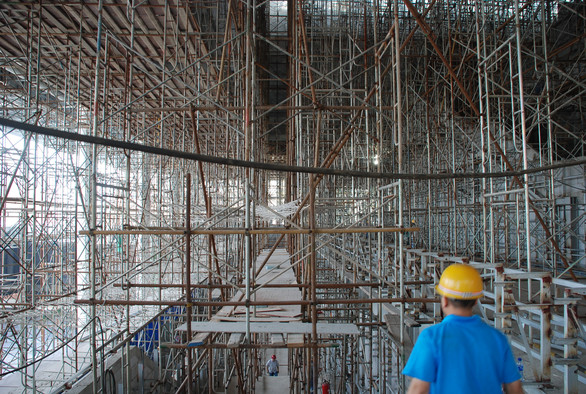