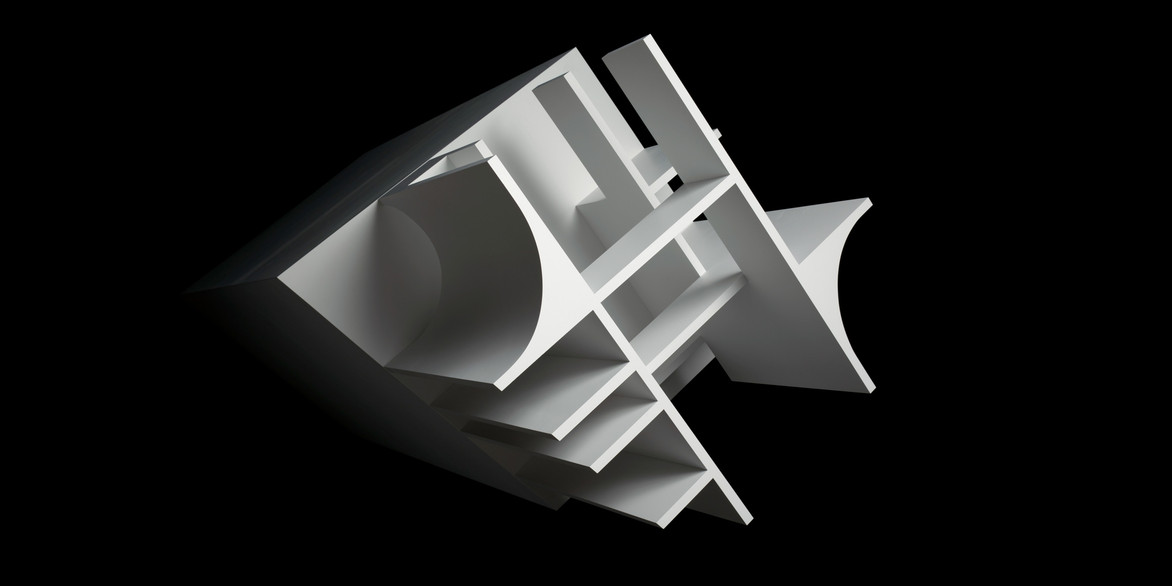 Prof. Adolf Krischanitz (Vienna) and Nicola Bormann (Managing Director of the Architecture Gallery Munich) will speak at the opening event on 21st February at 7pm.

Piet and Wim Eckert develop their buildings and projects as a synthesis from a reaction to the context and an interpretation of the architectural program: along with the conditions of the location, cultural, political and economic relationships are evaluated. Given the increasing complexity of the building assignments and the exceedingly diverse views from politics, society and clients which are pressed upon architecture, the brothers also see contradictions, mishaps and unforeseen events as a potential for architecture. In the sense of a systematic incoherence, an architectural quality is not possible without conflicts. Every restriction gives at the same time criteria for a further development.

The approach is based on; firstly to uncover the core aspect of the respective question, to distil the essence of the given assignment in order to align and sharpen the design solution accordingly. With their approach in conjunction with a setting of clear priorities - what is abdicable, what is imperative to retain in all circumstances? – allows Piet and Wim Eckert to develop a specific architecture which is able to integrate conditions which were previously excluded whilst avoiding any form of repertoire.

In the case of the Heinrich Böll Foundation in Berlin the typological contrasts of both “spatial protagonists” office and conference centre are made a central aspect in the design: in a rather unimposing office cube, Piet and Wim Eckert integrate an impressive Villa on the first floor. In doing so the polarisation is not only apparent in distinguishing the use of materials of the office floors in relation to the conference floor, but it also defines the form of the building: the piano nobile is fully glazed and cantilevers out on three sides into the park, elaborating its function as the grand feature of the building. The play on the materialisation of the spectacular foyer with the bare office floors allows the ambitious spatial program of 7,500 square meters of surface area to be realised within a budget of 10 Million Euros without making the building appear humble.

The parameters for the Auditorium and Library Building in Stäfa were to generate a new volume with a column-free attractive auditorium, constructively using the foundations of the previous building until the base floor: in order to preserve the existing structure, the load was carried to the existing foundations through 70 centimetre walls. Due to the spatial and functional use, it was only possible to place the walls at certain places in the building, therefore the columns for the beams of the reinforced concrete floor plate and walls of the hall expand bell-mouthed upwards and lift the auditorium as an abstract atlas levitating over the fully glazed ground floor.

Models as a central medium

In this combination, models have an essential role: with the architecture they share threedimensionality, and the associated multi-perspective perception. Therefore they do not only play a central role as a development tool in the design process, but also as a presentation medium: models allow us to comprehend the core idea of the design and discover the spatial consequences of a conceptual decision. They don’t need to be “true”, they may represent what they choose to represent – as a “three-dimensional sketch” the quality of the statement made lies in the accentuation of the essential, through the conscious simplification of the reality.

Architecture is to be imagined and presented differently in each of the three rooms of the Architecture Gallery in Munich: the main focus of the first and largest room displays realised and competition projects, which are based on the concept of “systematic incoherence” and react ideologically to the contradictions of the respective project assignment. They will be displayed in the form of 18 monochrome white presentation models. Legible as an X-ray or a full body scan, they show the conceptual essential and conceal the insignificant: the concentrated and precise representation of one aspect in model form opens at the same time the prospect of the uncertain, not visible and variable.

The second room which is fully furnished in grey dedicates itself as a reading room: each book illustrates a different project in depth and clarifies the design ideas. The third and final room which remains in white contrasts to the representation of the built reality: photographs illustrate the realised buildings; the presentation is orientated on the Petersburg hanging, however the format of the buildings defines the format of the photograph.

The exhibition intentionally resists on representing each exponent in all media forms, instead it focuses on the exchange of model, text, plan and image as different tools, which come in to play in different phases of the design process, at the same time representing different levels of construction and the illustration of architecture. The exhibition also plays on the themes of colour and saturation, abstraction and reality. 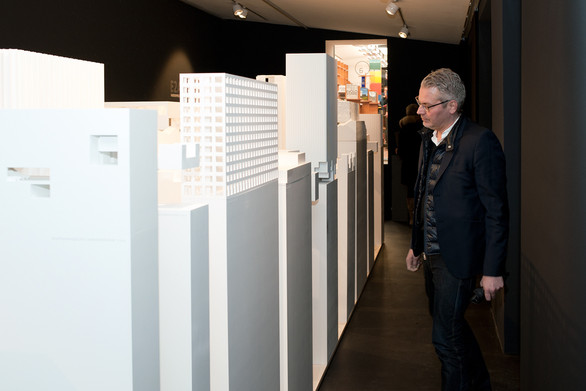 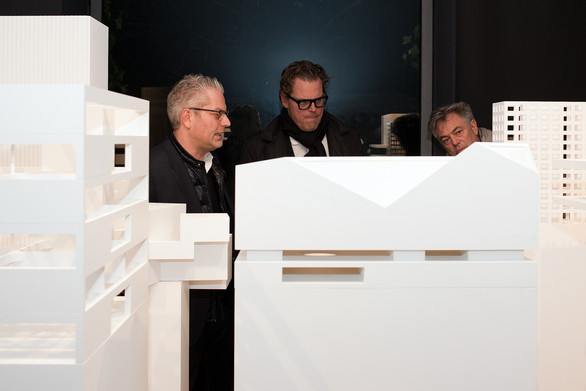 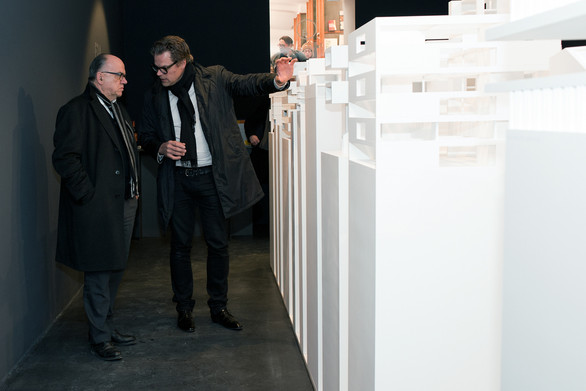 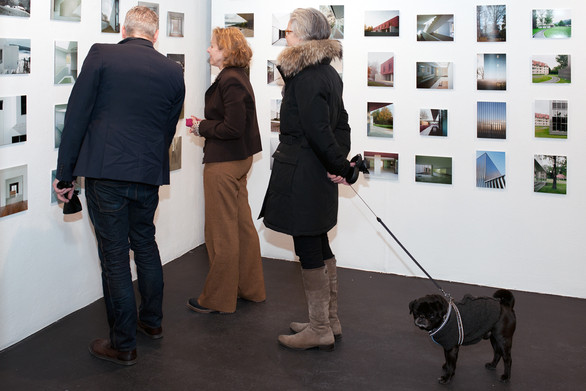 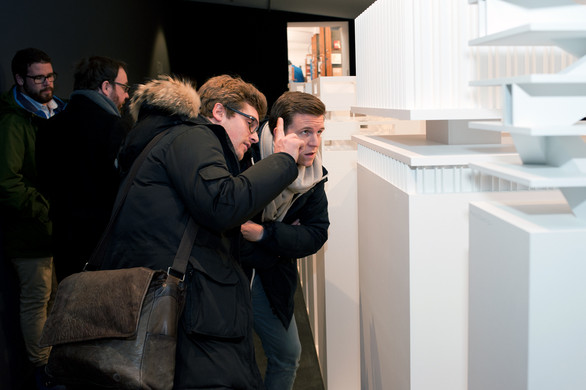 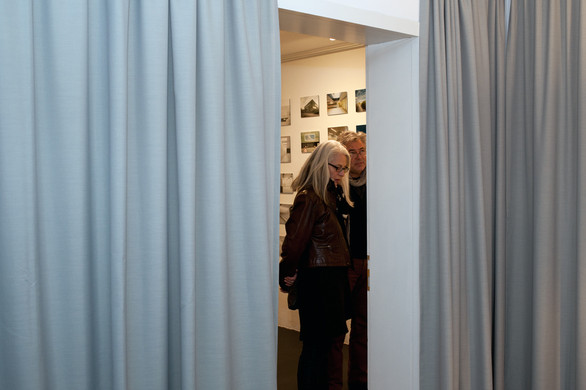 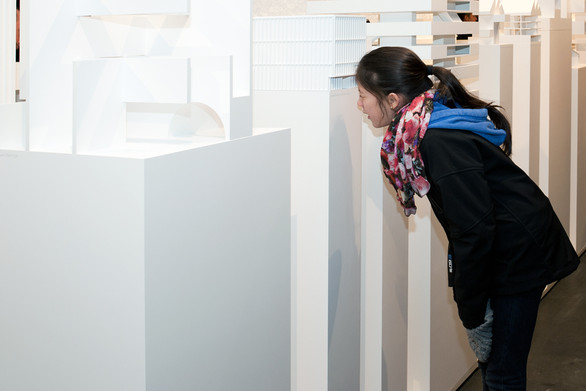 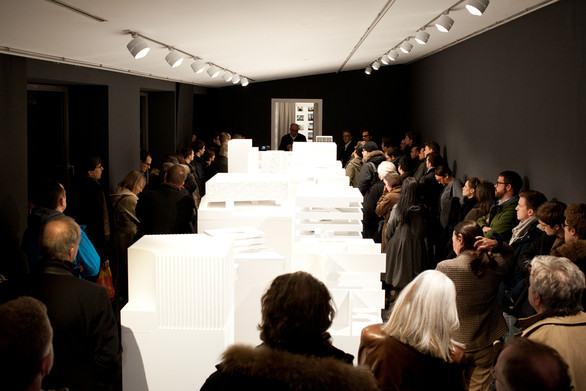 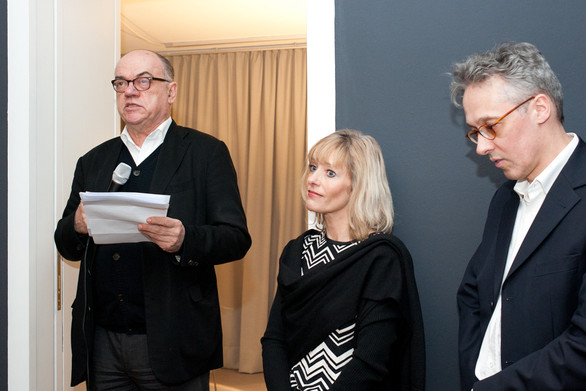 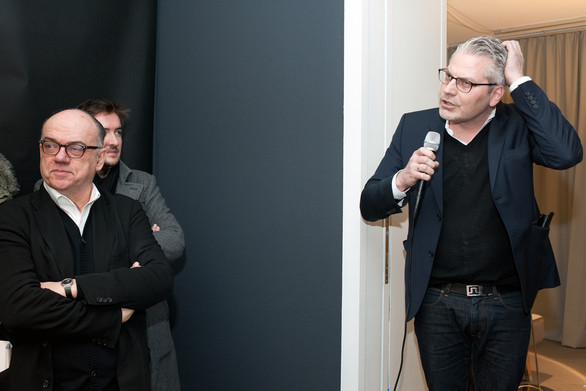 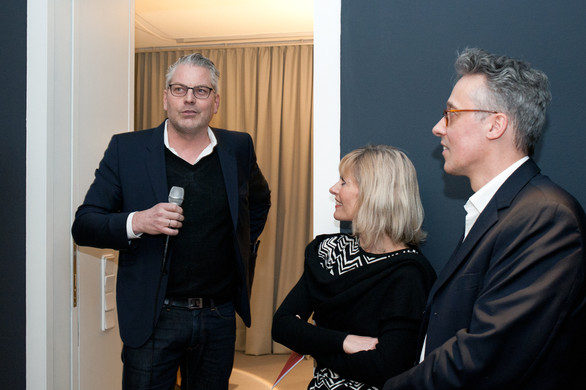 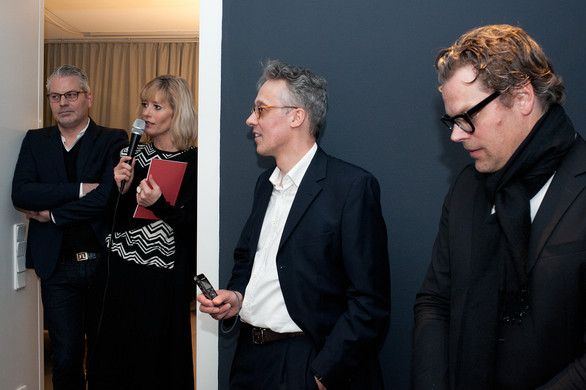 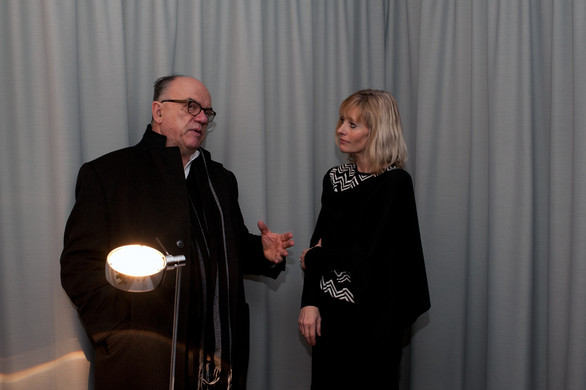 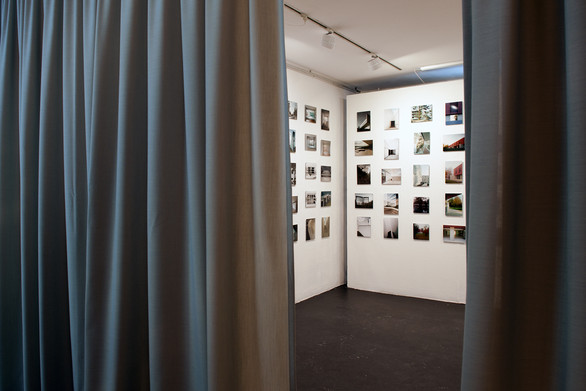 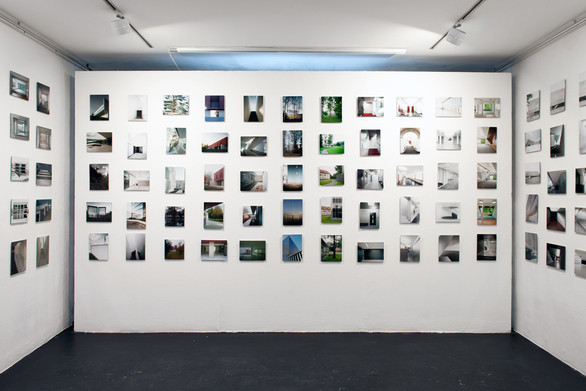 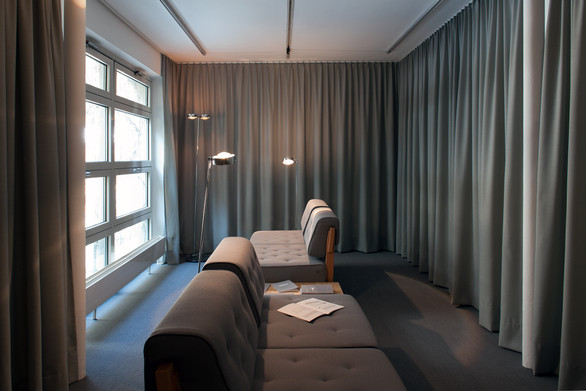 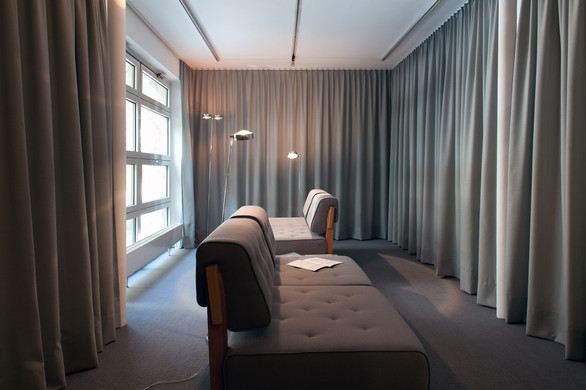 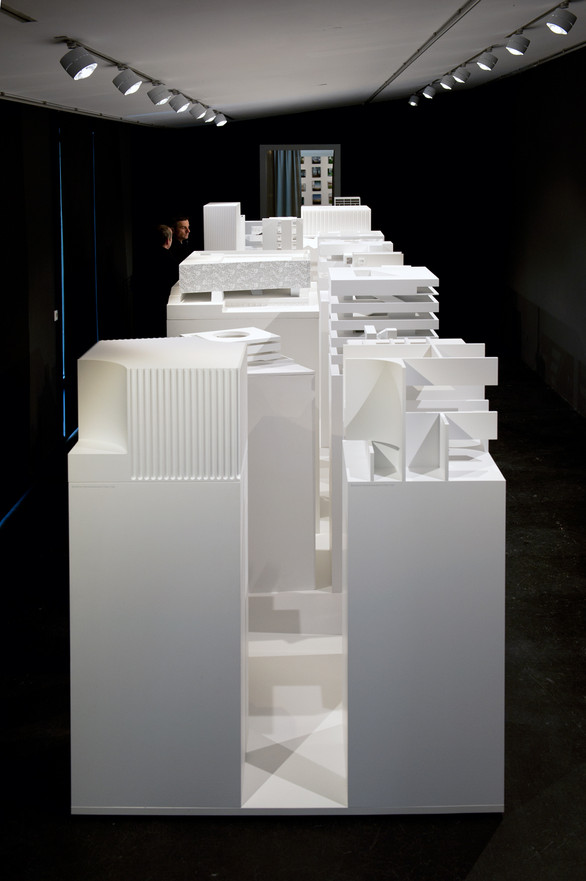 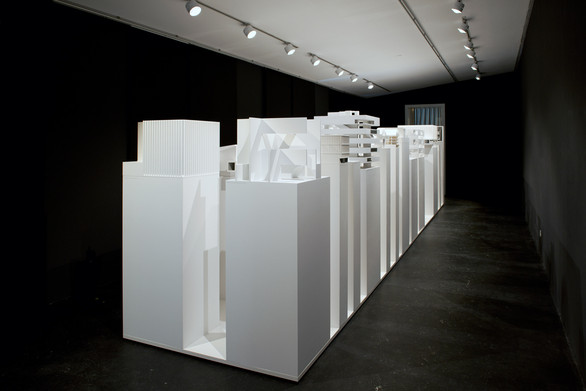 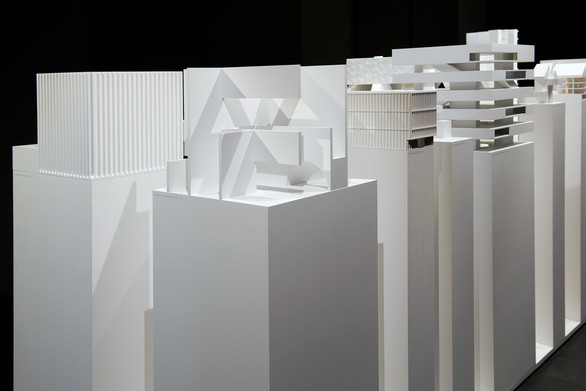 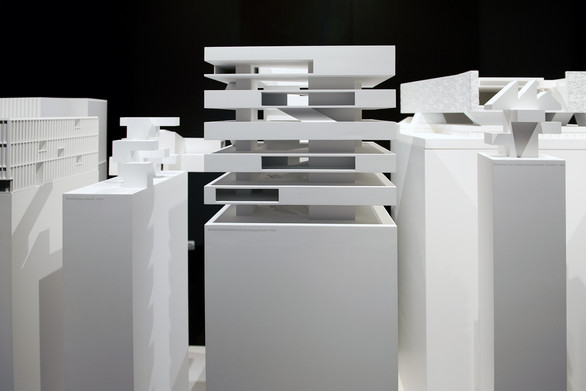 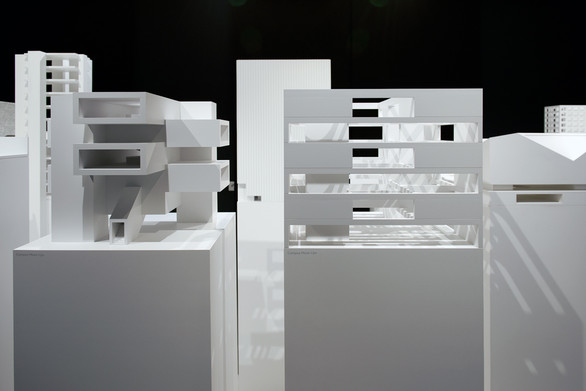 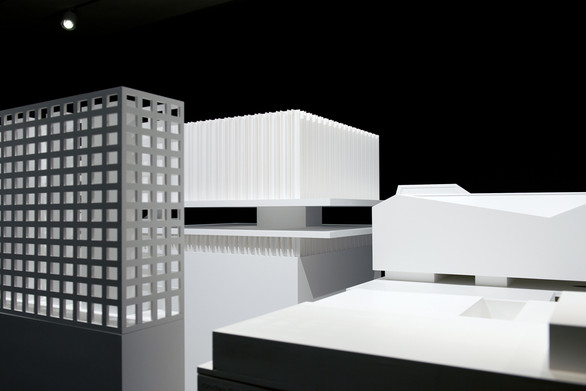 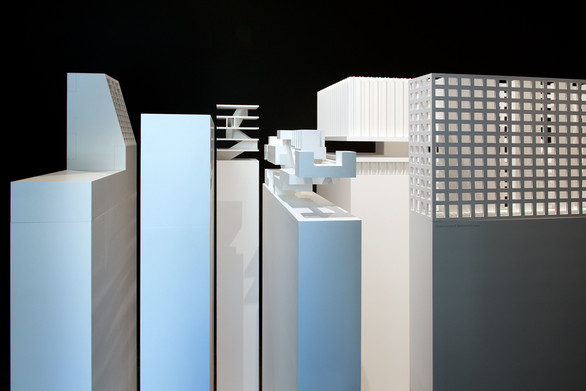 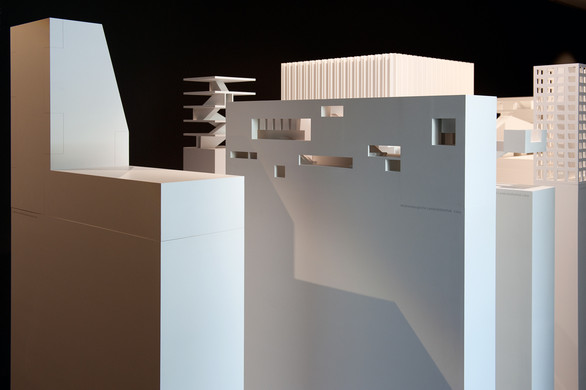 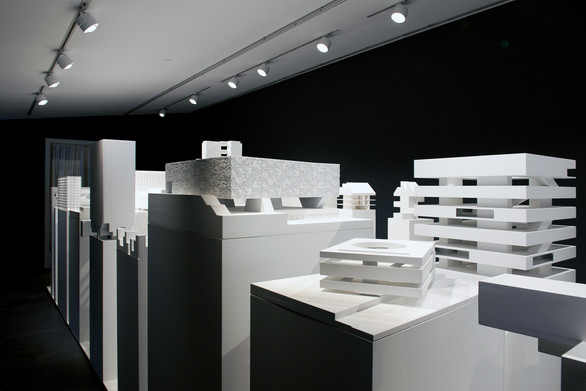